Al Gore is now pushing wireless technology. "Wireless technologies can be used to help monitor the health of the planet, he said, pointing to disappearing polar ice caps and rising temperatures." Right. Just throw some wireless equipment onto the ice floes and check the polar bear stools later to see if they ate the stuff. If they did, then that proves...er...something, I'm sure. Although, if the polar ice cap is melting, do you really need wireless technology to find out? How about if you just head out in a cruise ship from the north coast of Alaska and see if you can make landfall in Norway without running into anything? 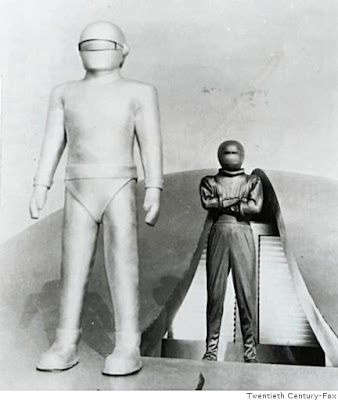 Update: On a serious note, let's pray that these two women, employed by a media venture founded by Gore, get out of North Korea as soon as possible.
Posted by Paco at 9:09 PM

Paco,
"How about if you just head out in a cruise ship from the north coast of Alaska and see if you can make landfall in Norway without running into anything?"

Sorry, makes too much sense!

Is Big Al really pushing wireless, more-info, technology? 'Cuz it seems to be spreading information that is killing off the AGW hysteria right now.

As for those two journalists: This is yet another provocation against Obama's leadership. Every tinpot, dunghole nation and group on earth seems to be pushing their limits since he got elected. Sadly, I don't see much pushback.

Wireless technology has been monitoring the health of the planet for a looooonnnnggggg time now. It's called "radio", and has been used by scientists to transmit data since Marconi started slapping his key. It really took off in the 1960s with the invention of smaller electronic components, and the development of remote sensing techniques. But those Arctic weather stations didn't send reports by carrier pigeon, I assure you.

It's just that the so-called "wireless technology" actually means "wireless telecommunications for computer technology". What used to take a full science team feeding reports back by Morse Code on high frequency radio can be done by unmanned sensor stations transmitting data back to the researchers with limited human support.

But even today's remote sensor links don't use what most people see as "wireless technology"; it still uses honest to goodness radio, linking back to the main server by satellite relay or meteor bounce. THAT'S when the "wireless technology" really kicks, and you can read the results at the local Starbucks from the appropriate server.

I assume that Al Gore is just trying to claim credit for inventing the wireless portion of the INTERNET. Shameless, ain't he?