America: Just Another Distraction for Obama

Has any American president - hell, has any president, prime minister, monarch or dictator - ever dissed his own country abroad the way Obama has? First he records that TV commercial of his awesome self and beams it to Iran (where the reaction of the mullahs was pretty much, "Meh. What else is on?"). Then he goes to Europe, where he winds up putting not only physical, but philosophical, distance between himself and America, and gets the raspberries from the friggin' president of France!! And now he's all set to offer apologies on behalf of the USA to a gaggle of commie buffoons in South America.

And you know why he feels no shame or embarrassment for making these apologies? Or, for that matter, any anger when tinpot tyrants mouth off at the USA? Because he has so dissociated himself from America and its history and traditions that he considers himself as hardly more than a disinterested runner, just a paid courier delivering somebody's else's message - our message, as it turns out; or rather, the message that we Americans would and should deliver if we weren't such jingoistic, flag-wavin' cowboys. Sickening. 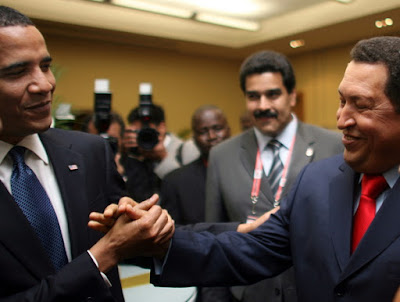 "Yo, Hugo! What up, dawg? I'll arm-wrestle you for Colombia!"


Update: It's the sheer "unawareness" that's mind-boggling (Texas Rainmaker via Smitty at The Other McCain).
Posted by Paco at 9:26 PM

Who will stick up for us if the big guy won't? I feel like a kid without an older brother...

One more thing Obama is unaware of, while he's trying to make dictators like him by dumping on America: he's unaware that the rest of the world is either staring, aghast, or laughing up their sleeves.

Indeed. It is striking how Obama seems oblivious to the fact that he is supposed to be acting in his capacity as president, not just as a tourist. As long as the criticism from these Marxist bozos doesn't touch him personally, he is blithely indifferent to the insults they offer to his country. What a great message to be sending to the tyrants of the world, both existing and wannabe: Hey, as long as your plans don't discommode Obama personally, have at it!

The Traitor, oops, I mean Bill Clinton has spent the last eight years trashing this country while earning gigantic speaking fees abroad. He should probably be 1A on your list.

This is not surprising considering the company he kept in this country. When you travel in the Wright/Ayers circle of friends this is what you are going to get. I just surprised he hasn't said somethng on the order of: "All good points Daniel and Hugo but you forgot some things. Here, let me refer to my list so I can help you out."

What Yojimbo said. I haven't noticed the president trying to cover up his disdain for America. He mostly appears to believe that the country is beneath his dignity. I'm not big on quoting Spiro Agnew but when it comes to The Mighty O the words "effete snob" certainly come to mind.

DAMN! He's more unaware than Terry Schiavo, and they sentenced her to death by dehydration.

RebeccaH, apart from South America and Russia, the rest of the world (in Eloi mode)will sleep thru this.

And you could see it as a useful good-cop routine to GWB's bad-cop (actually he laughed off a lot of insults from the Euros in his time too, but no one remembers that).

Pres Obama may be all new age ingenue but the US can use this to mess with the minds of your global enemies. As long as you all, the silent majority, let him know clearly how far he can go, with things like the Tea Party movement, then you can use his apparent innocence to get a lot of cheap international mileage. Like how Musharraf got lots of traction acting as middle-man between his extremists and the world.

Pres Obama: 'I'm on your side but back home there are a lot of crazies who won't let me help you till you...'

Keep up the Opposition!

Obama is not the President. At least, not in results. He's more like a court jester.

This poseur, is a disgrace to this nation.

He's just trying to make America something he can be proud of.

You miss the point. Barry is dissoiated from EVERYTHING that isn't Barry.