Hundreds of Litigation Attorneys Injured Attempting to do Cartwheels of Joy

Democratic congressmen Henry A. Waxman and Edward J. Markey have authored a provision in a climate bill that would permit citizens to “sue the federal government or private businesses over greenhouse gas emissions.”

Of all the pea-brained, irresponsible, moronic “ideas” these two congressmen have been associated with, it would be difficult to find one more costly and divisive than this one. During a recession, in a global economic meltdown, these two clowns think it would be just fine and dandy to impose a huge new potential liability on the federal government and practically every private company in the U.S. – not that it wouldn’t be a horrible idea at any time. And this, in spite of – to put it charitably – the lack of scientific consensus concerning both the extent of so-called greenhouse gas emissions, and the risks entailed. 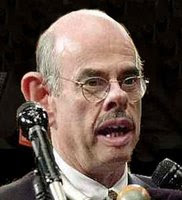 How ya likin’ that socialism with a human face?
Posted by Paco at 6:10 PM

Splendid! That thought hadn't even occurred to me.

Henry Waxman is an Orc. Tell me it isn't so.

If any companies get sued for gashouse emissions, I'd encourage (hell, I'd even contribute to their legal fund) the owners and employees to countersue, demanding proof of global warming, and seeking punitive recompense for frivolous, reputation-damaging complaints.

Rebecca: Yep. That's how I picture 'em, too.

Rebecca - there are already a lot of prominent people, so-called analysts, and news media out on that limb.