Lenin is famously (if perhaps apocryphally) quoted as having said that "the capitalists will sell us the rope with which to hang them". Whether or not he actually said it, he always behaved as if he believed it. And unfortunately, there are always capitalists who are only too willing to support the central-planning instincts of government - as long as they get something in return.

Jeff Immelt, the CEO of GE and a big-time Obama supporter, was recently named chairman of the president's outside panel of economic advisers and - lo and behold! - GE has just received the first exemption to the EPA's new greenhouse gas restrictions.

Now, I happen to think these particular EPA rules are a potential regulatory minefield; perhaps they should be scrapped altogether. But people like Immelt, rather than speak out against the garotte of regulation, would prefer to wangle his company a special deal rather than take a principled stand that would benefit businesses in general. This is the way of many large corporations, whose bureaucratic structures and quest for power frequently come to ape the government's methods and appetite for control. This is why Obama's attempted rapprochement with the business community has all the earmarks of a gangland combination. 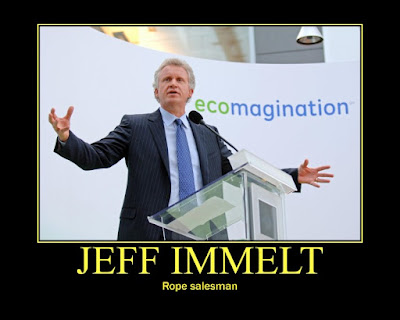 There is a big difference between capitalism and cronyism/corporatism.

If you think their interlocking web is bad take a look at Goldman Sachs.

Some people think that they can deal with the devil, and come out ahead. The technical term for this condition is "fool".

"The Aristocracy of Pull."

Leftists will always deny it, but they are the natural ally of big business. Most businessmen aren't interested in competition, but in profits, and especially in guaranteeing those profits. Invariably when given the opportunity they cozy up with statists in order to obtain special protections, and if possible to hamstring their competitors.

-The Left in Hollywood can portray the Big Businessman as the great evil manipulators of the world all they want in the movies and on TV, but nothing they do will obscure the fact that the Left and Big Business are partners in the Fascification of America.

-Quoted from and Linked to at:
Not A 'Friend Of Ours'