One would have thought it impossible

First he claims that opposition to the assertions of Cli-Fi enthusiasts is like racism, and offers this advice:

Brilliant! So, if someone challenges anything a Gorean acolyte says about climate change, said acolyte just walks away, or maybe puts his hands over his ears and sings tra-la-la, and victory is assured!

BTW, have you seen photos of the new Martin Luther King statue? 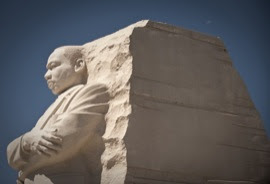 It’s a good thing they left that big chunk of granite on the back. Eventually, a grateful people - or more likely, their government - can subscribe to the sculpting of Al Gore’s image on the reverse with an appropriate sentiment carved into the base: Hero of the Moral Equivalent of the Civil Rights Movement.

But Al’s not finished. He also believes we should reduce our carbon footprint by eating more organic food and less meat.

Oh, pardon me a minute.

Hey, Al! Your lunch is here! 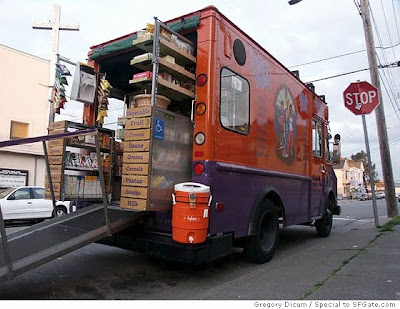 Seriously, though, has anyone seen a recent photo of Al? He looks like a refrigerator with a Man-in-the-Moon cookie jar sitting on top of it. His gothic dimensions do not suggest a diet of lettuce and oatmeal. Why, I bet if he went on a hunger strike for a week, his unconsumed vittles could support an entire Honduran village, leaving the campesinos completely satiated and bursting their rope belts.

The many frustrations attendant upon full-time prophesying notwithstanding, Al continues to profit handsomely from his advocacy of the global warming flapdoodle. When the time comes that his family and friends, after much soul-searching and consultation with eminent psychiatric specialists, must ultimately put him away for his own good, he can rest assured that the institution in which he is to be confined will be solicitous of his every need. Maybe, under ObamaCare, he won’t have to pay anything at all.

Methinks that Gorezilla dines on fried peanut butter and banana sandwiches thrice daily, Deadman. No pork, unless it's deep fried in lard.

My God, did we dodge a bullet.

I'm beginning to think the whole AGW/CC cult is suffering from a shared psychosis.

You've got the algore and his BS rant and vegan solution to AGW, and some CC scientists warning of an alien attack, if we don't clean up our act.

Is this the best way they know to present their case to the people of the world? Or, is it the signs of a movement beginning to collapse under the weight of it's own arguments, and hypocrisy.

When it comes convincing someone about a science claim, wouldn't it be more effective if they at least gave the appearance of being logical, and not a bunch of moonbats?

Jorg -- More like a bombard stone, from the looks of it.

Quoted from and Linked to at:
Al More

The only real question about him is: Is he bugnutz crazy, or is he just a shameless, bold-faced liar?

And the answer is: Yes.