Really, governor? The problem is that Republicans have to start "liking people"? And the other day Jindal was saying that the Republican Party couldn't just be the party of the rich - thereby playing directly into the hands of Democrats, who have been forever peddling that false message while simultaneously banking enormous donations from Wall St. fat cats and sinister domestic and international billionaires.

The Democrats have spent the last couple of decades demonizing huge blocs of people - Caucasians, non-union workers, people of religious faith, the entrepreneurial class - and we Republicans are the ones who don't like people? I don't think you enhance the notion that the GOP is the party of ideas through a false admission that it is, and has been, pretty much what its enemies have always said it was.

Jindal's comments were triggered, it seems, by a statement from Mitt Romney that he lost the election because of Obama's "gifts", i.e., the expansion of benefits and support to an electorate increasingly dependent on the federal government. That certainly isn't the only reason Mitt lost, and it might not be a politically correct formulation, but the statement, as far as it goes, is absolutely true, and is a perfectly accurate characterization of what has been the Democrats' long-term strategy since the New Deal.

I'm with Brit Hume: "someone should probably hose Jindal down".

Oh, and here's a great idea from John McCain. What's the best thing we can do to "regain some credibility" in the Middle East? Why, send Bill Clinton there as a special envoy. 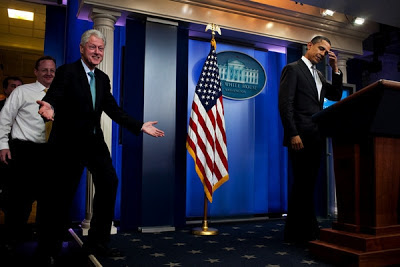 "Did somebody say belly dancers?"

Sorry, but sending Bill Clinton to broker a peace deal between the Israelis and the Palestinians is a stupid idea. He may have had credibility with them back when he was president, owing to his consummate political skills (read: ability to snooker nearly everybody), but since Barack Obama took over, Bill Clinton's influence and credibility have hit the skids. Obama has undermined the Clintons at every juncture, and managed to do it using the minority demographic (Surprise: Bill Clinton really wasn't the first black president). Nobody believes Obama would uphold anything Clinton promised.

Jindal is playing politics with the GOP establishment, but he needs to know that's a losing game.

And then there's the flip side to sending Bubba. Literally.

Where's Hillary? You know, our glorious Secretary of State?

Did she drink too much wine in Australia?

The ultimate gift: the Obama Phone

I see Billary is en route to Gaza as we speak. She must have sobered up enough to remember she has a full time job.