I sauntered over to the above-named around 11:15 this morning and encountered a sizable crowd, undeterred by the rainy weather. Using my sophisticated crowd-estimate model (which involved counting the legs and dividing by two), it looked to me as though there were probably 200 or so patriots. Unfortunately, I was unable to get close enough to the platform to identify any speakers, but I did take several pictures of people in the crowd, some of which are included below (be sure to click on the images to enlarge).

Ayn Rand fans were much in evidence…. 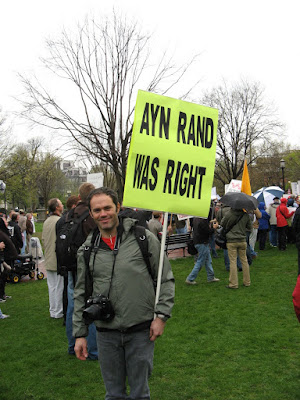 …as was the snake flag. 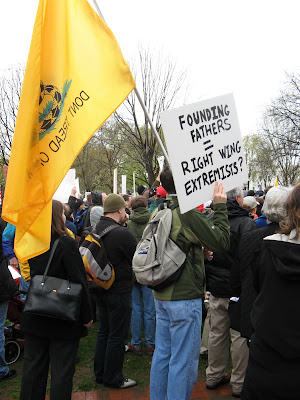 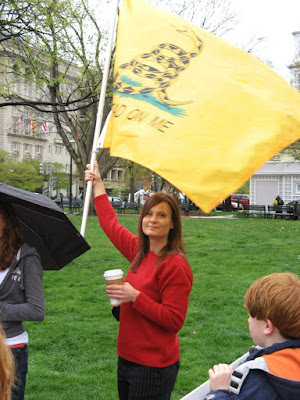 The guy on the left is trying to make it easy for Homeland Security. 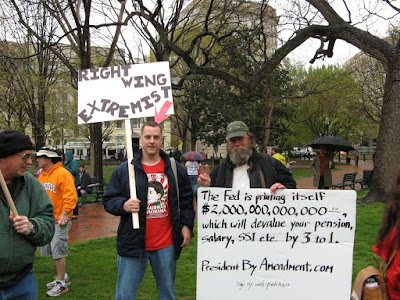 This lady, God bless her, was all about the message. 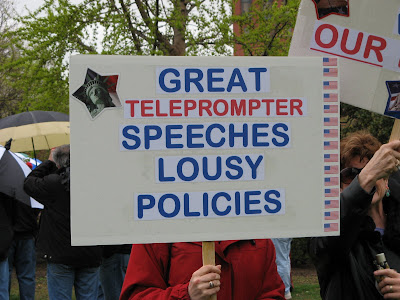 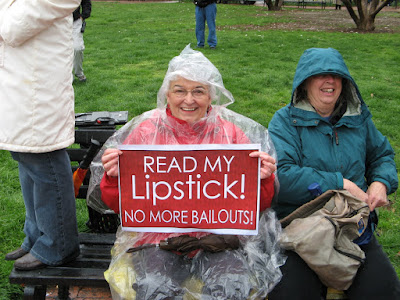 As I’ve said before, protest is fun for the whole family. 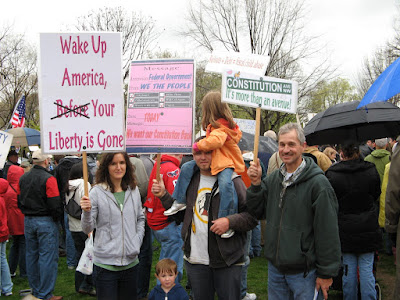 As Ed Morrisey said, “It’s not about the present, it’s about the future.” 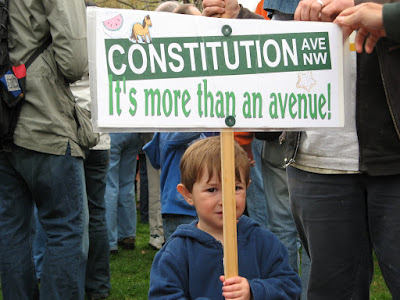 I didn’t see any hecklers or infiltrators (although one suspicious-looking young fellow with curly red hair, a goat-face and no eyebrows was making the rounds asking questions, e.g., “So, why are you here?”). The signs and placards all looked homemade (not like the assembly-line, faux-folksy “grassroots” signs that leftist groups hand out free to their minions). It was a large, peaceful, cheerful group of people who had come together to make themselves seen and heard on one of the most critical issues facing our country today - stopping the federal behemoth from crushing the life and soul out of our America.
Posted by Paco at 8:05 PM

Were you there when somebody threw a box of teabags over the White House fence causing the Secret Service to clear the area?

@Anonymous:
Really? I thought that the permit must have expired.
At any rate, linked you here.

Standing room only at The Landing in Jacksonville, a small venue with limited parking during a workday (I was late so had to park @ a mile away and walk).

Lots of great, hand-made signs. "Who is John Galt" and "Ayn Rand was right!" were in evidence. Quotations by the founding fathers were quoted and spelled correctly. A clean-cut group of all ages and backgrounds, people in motorcycle garb along with business suits. A polite group that didn't litter.

A group that has had enough, though, of government spending. These are people that our current government would never understand--people with principles.

Retread: I was there from about 11:15 until maybe 11:45 or a little later. I can see the park from my office window, and, as far as I can recall, the park was full all day; I wasn't aware that it had been cleared as a result of a deadly teabag bomb being thrown over the fence.

Thanks, Paco, and all of you who attended a Tea Party, sent a teabag or 6...and paid your taxes. You are Finest Kind.

The park was temporarily cleared, and then the people were allowed back (see Moe Lane).

KC: you've just given me a great idea; next year, I'll pay my taxes in the equivalent value of tea bags.

I attended a rally over in the Tri-Cities, about an hour drive for me, one way. Good rally, lots of flags, great speeches, and clearly not astroturfed. 400-600 people were there, and plenty of people waving and honking their horns as they drove by.

The Marquis would be proud.

Went to the local rally, saw the figurehead of the so-called California Republican Party pwned and mocked for signing on to the upcoming Prop 1A, a $16 billion tax increase, when he tried to attach himself to the tea party. Classic.

One in Santa Monica, down by the Pier. Cloudy and wind gusting to 60 mph. The rally started at the end of the pier but had to move back to the street end; imho a better location. I'd say 500-600 people at any one time. Great feedback from the passersby. Code Pink tried to 'infiltrate' (all four of them) and were basically swallowed by the crowd.

Second one in the evening, Van Nuys Federal Building. I'd say 800, easily. This time the 'infiltrators' were my old buddy Wade and his crew from Neighbors United for Peace and Justice in Studio City, so I made a point of following him around and introducing him to all the attendees and cops we passed. He took this in the spirit intended heheheheheh.Excellent turnouts, friendly, happy clean crowds. Cops were first rate. I apologized to the SMPD for the lack of property damage but they were okay with it.

I went to the one at Lafayette Park as well. Probably got there just as you were leaving, Paco. I put on these dollar-sign sunglasses which amused quite a few people.

Isophorone: Sorry I missed you! I was wearing a gray trenchcoat and a blue fedora; I think folks may have had a fuzzy idea that I was a reporter.

Sorry, that should have been,
You're covered, KC.