Rita Johnson was a leggy blonde who had some memorable screen roles in the 1940’s, including Here Comes Mr. Jordan (with George Montgomery and Claude Rains) and the nail-bitingly suspenseful The Big Clock (Ray Miland and Charles Laughton). She had a wonderful, completely-at-ease style, and was a joy to watch on screen. Unfortunately, she had what has to be one of the most bizarre accidents in Hollywood history (a hair-dryer fell on her head), and she suffered a significant head injury requiring surgery. Although she recovered, the injury led to some physical problems that shortened her career. 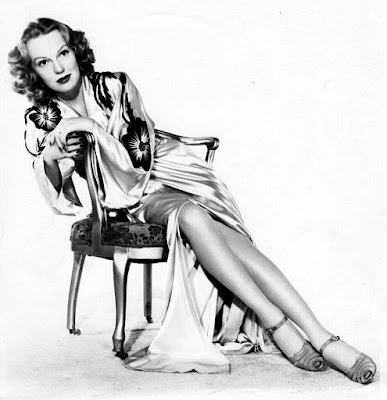 Janis Carter was the quintessential blonde bombshell, and appeared in 30 films, ranging from war movies to film noir to comedy. I particularly liked her in the 1947 movie, Framed, with Glenn Ford. 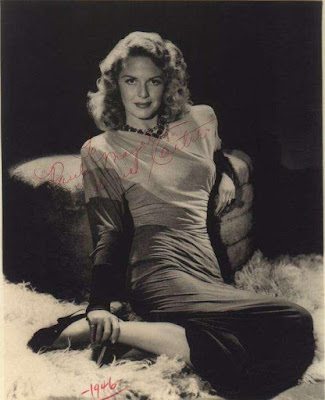 Greer Garson was a celebrated English-born actress who had seven academy award nominations during a movie career spanning thirty years (she took Best Actress for her role in the 1942 film, Mrs. Miniver). She was frequently paired with Walter Pidgeon, but co-starred with many of the top actors of her day, including Clark Gable, Laurence Olivier and Ronald Coleman. Here’s an odd fact: she’s credited with giving the longest Academy Award acceptance speech in history (over five minutes). 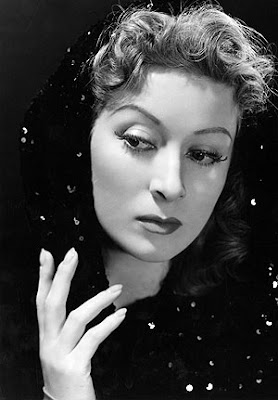 More proof that there is a God in heaven and that he loves man.

Janis Carter had all the right curves ... where was I? Theo Spark may have full colour shots and click-to-enlarge (and I do, even at my age), but he can't beat that for class.

I would have to say Rita Johnson had perfect legs. Who cares whether she could act or not (although I'm sure she could quite well).

2. Remember, in the 40's - or whenever the accident occurred to Ms. Carter - hairdryers were not the little hand-held doo-dads of modern times, they were MASSIVE and HEAVY! If it was one of those hood things you sit under - and being of a certain age I do remember my mum under one at the beauty shop - it's a wonder she wasn't killed.

KC: Yes, the movie was remade as Heaven Can Wait; I agree - no comparison.

It was Rita Johnson who had the injury. I can imagine that one of those huge old hair-dryers could easily do some damage.

Over at The Other McCain, Smitty wrote in his RULE 5 posting:
Bob at The Camp of the Saints sends Ava Gardner to, you know, rough Paco up a bit around the edges. This blog hopes to fuel a positively dame-a-licious blog noir war.

My dear friend, there was no hostile intent on my part at all. This Smitty fella is trying to create a rift between us. I think we have to band together and fix the problem with this stroost so one day, when Stacy asks us 'Where's Smitty', we can jointly reply: 'Oh Smitty...you won't see him no more'.

Bob: There can be no grounds for animosity when the end result of our mutual efforts is the posting of as many pictures of the gorgeous Ava Gardner as possible.

"sends Ava Gardner to, you know, rough Paco up a bit around the edges."

Actually, I wouldn't mind being roughed up a bit by someone looking like Ava Gardner. Especially if she's wearing stiletto heels. And black stockings with a garter belt. Yeah, and ...

(wronwright ponders being roughed up by Ava, Rita, Janis, and Greer, all at the same time, oh yeah)

See what happens when I hurry too much? I bonk the wrong lady with the massive hair dryer. Sorry!

I heart Greer Garson. Thanks.