Everybody's probably seen the funny photo in which a squirrel popped up as the camera clicked on a couple of tourists. You know, this one... 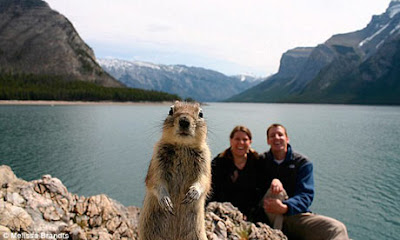 Well, Ace of Spades has a link to the "Squirrelizer", a widget that enables you to embed the squirrel picture in other photos.

Here are a couple of my efforts.

An out-take from the 1947 Robert Mitchum film, Out of the Past 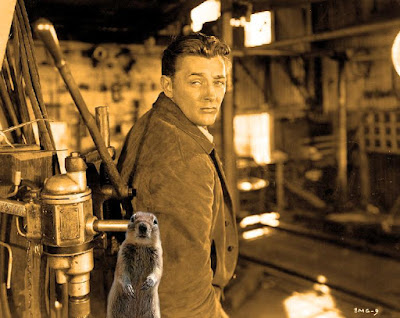 An out-take from Casablanca 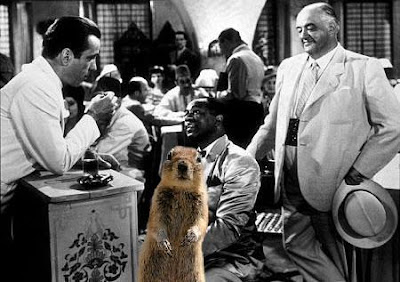 "Cut! Somebody get that squirrel off the set!"
Posted by Paco at 9:36 PM

Oh, that's such fun! I gotta see if I can find a wedding photo of Lovely Daughter and Handsome Son-in-Law!

One of Ace's links leads to the Top 10 squirrel pics, and the best is Tiger Woods and Nuts.

Having just come here from LGF, I am forced to the conclusion that he has something similar. Except that the pop-ups are a rag-tag group of fringe-dwelling bogeymen. It's getting boring, and I'm on the verge of deleting the site from my blog look-at list.

"Here's looking at you kid."

Sounds like one of those critters would fit right in with Joe Biden!

Out of the Past is a terrific movie, great to see other folks who know it.

Kathie Moffat: Oh, Jeff, I don't want to die!
Jeff Bailey: Neither do I, baby, but if I have to I'm gonna die last.

Chris: That is my absolute favorite (among many great) lines in the movie.