No, he won’t admit it, so the quotation marks are, of course, spurious. But there can be no mistaking the truth of the assertion. Our president is a fool, an egomaniac who is willing to put the country’s economic future – and our citizens’ lives – at risk in order to save face in pursuit of the most ill-timed and destructive piece of legislation that we have seen in our lifetimes. That the leaders in his party are willing to support him in pulling the pin on this suicide policy-bomb reveals, for the thousandth time in recent history, the absolute moral bankruptcy of the Democrats – a moniker, incidentally, that is now saturated in tragicomic irony.

It is madness. Many Democrats seem to truly believe that a wildly unpopular bill that will subject the management of health care to the arbitrariness of faceless and indifferent bureaucrats, and citizens to the crushing expense of paying for the inefficient, rights-destroying, and life-threatening scheme, can somehow be made acceptable between now and the November elections; that the voters’ collective nose will become so accustomed to the stench of corruption and the fumes of noxious ideology emanating from the legislative tannery in Washington that all will be forgotten come autumn.

At least, this is the laughing gas that Obama, Pelosi and Reid are trying to pump into their colleagues. I strongly suspect that Obama and Pelosi must know that an electoral bloodbath is coming (Reid probably knows it, too, but since even he has to have figured out that his days in office are numbered, this vindictive husk of a man is perfectly happy to give the people a thumb in the eye on his way out of the door, a partisan hack to the end). What the President and his allies in congress and the senate genuinely hope is that, once established, this massive new entitlement will become a permanent part of our society’s landscape, irreversible and ineradicable (here they may have miscalculated; the structural parts of the entitlement would not occur before 2013, a year which, at this point, I doubt that anybody but Obama and Axelrod consider to be a sure bet for the inaugural year of an Obama second term).

Quite apart from ObamaCare, this administration is failing on practically all fronts (the lone exception, for now, being the president’s military policy in Afghanistan and Iraq, where he has followed George Bush’s playbook in toto). A string of foreign policy pratfalls – most recently the utterly pointless squabble with Israel – would have embarrassed even the hapless Jimmy Carter. In fact, were Obama and Carter to form a slapstick team, I suspect that Carter would now be playing the role of straight-man in the partnership. Then there was the push for cap-and-trade at almost the very moment that the global warming syndicate was unraveling as the result of the revelations of bad science and worse ethics. Consider, also, the employment bills that have created either 0 or 2 million jobs (pick your news outlet), but haven’t made a dent in the high unemployment rate. And the endless exhibitions of pettiness: the war against Fox News, the attack on the Supreme Court from the safety of the podium during a state of the union address; the demonization of political opponents (actual and presumed); the extraordinary overexposure on television, as the president appears with the frequency of cable commercials advertising erectile dysfunction products or Activia yogurt; sending Joe Biden anywhere, or putting him in charge of anything.

In the medieval church, the liturgical prayers included an appeal to God to “deliver us from the Turk.” With the exception of two small alterations in the spelling of the last word, I humbly offer up the same petition. 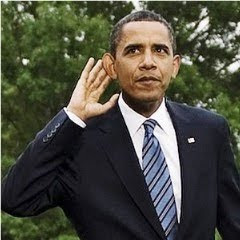 "Gee, wouldn't you know it; destiny calls and I can barely hear it over the shouting of all these tea-party morons."
Posted by Paco at 5:55 PM

The picture of Little Lord FaughtLeRoy, is the ear, (if real) (OK even if not real) would it be the rudder, flaps, or aileron?

Paco wrote: What the President and his allies in congress and the senate genuinely hope is that, once established, this massive new entitlement will become a permanent part of our society’s landscape, irreversible and ineradicable (here they may have miscalculated; the structural parts of the entitlement would not occur before 2013, a year which, at this point, I doubt that anybody but Obama and Axelrod consider to be a sure bet for the inaugural year of an Obama second term).

I lived too long as a Republican to be so optimistic, Paco.

As Mark Steyn wrote recently:
A bigtime GOP consultant was on TV, crowing that Republicans wanted the Dems to pass Obamacare because it’s so unpopular it will guarantee a GOP sweep in November.

OK, then what? You’ll roll it back – like you’ve rolled back all those other unsustainable entitlements premised on cobwebbed actuarial tables from 80 years ago? Like you’ve undone the federal Department of Education and of Energy and all the other nickel’n'dime novelties of even a universally reviled one-term loser like Jimmy Carter? Andrew McCarthy concluded a shrewd analysis of the political realities thus:

“Health care is a loser for the Left only if the Right has the steel to undo it. The Left is banking on an absence of steel. Why is that a bad bet?”

Indeed. Look at it from the Dems’ point of view. You pass Obamacare. You lose the 2010 election, which gives the GOP co-ownership of an awkward couple of years. And you come back in 2012 to find your health care apparatus is still in place, a fetid behemoth of toxic pustules oozing all over the basement, and, simply through the natural processes of government, already bigger and more expensive and more bureaucratic than it was when you passed it two years earlier. That’s a huge prize, and well worth a midterm timeout.

…Because government health care is not about health care, it’s about government. Once you look at it that way, what the Dems are doing makes perfect sense. For them.

Bob: Assuming business as usual, you're absolutely right. But I have not seen this many people this angry for a long time, and if the Republicans fail to take up the cudgels, then the responsibility for restoring our liberties returns to where it truly belongs - with each and every one of us.

Paco, Bob, that's why I keep calling this election a vote against incumbency itself. John Cornyn is no more entitled to keep his seat than John Kerry, and could conceivably be doing this country more damage than the swiftboated babykiller could dream of with the absurd cherry-picked "GOP" candidates he and his NRSC keep trying to foist off on the states...

Richard: That's really what I'm getting at. If our country is to have any chance at all of recovering its bearings, the people are going to have to make it very painful for the enablers in both parties.

What truly amazes me is that they seem intent on following this up with equally unpopular sweeping changes like immigration reform (amnesty), and cap-and-trade. Are they really so ideologically blinded, or tone-deaf, that they don't understand that all of this appalls the vast majority of the nation?

This surely tells you what they think of us; to them we're hick idiots whose opinion doesn't matter.

Paco
People get what they vote for. Why blame GOP for stupid voters.

Stack: I'm not blaming the GOP for stupid voters; I'm saying that GOP enablers, particularly the Party brass, are part of the problem. And, frankly, people don't always get what they vote for.

But you have put your finger on a much larger issue; for far too long vast sections of the public have not paid attention to what their own legislators have been doing. Or they have voted along lines of very narrow self-interest (Jack Murtha and all the pork he brought home, for example). And consider another issue: the long march through the institutions by left-wing academics who have shaped the minds (and continue to shape the minds) of upcoming generations. There are, unfortunately, many fronts.

Exactly right, Paco. People must vote for other than more bread circuses. Entitlements are killing us, but politicians love entitlements -- those supports their re-elections.

Where I come from, somewhere around North West London, England (originally), we differentiated between twot and twat. A twot is indeed a fool; a twat is a warm, moist part of the female anatomy.

Interestingly, both pronounced the same .. tw''.

Well, at the risk of derision, I'm keeping my fingers crossed for Palin. She cleaned out the old useless Republican Guard in Alask; maybe she can do it in Washington.

A breath of fresh air, I say.

@Robert,
'This town needs an enema,' to quote the Joker.
Cleaning out DC involves more than swapping nameplates. We have to change the game, not the playuhs, and that along more Federalist lines.

Robert: In the U.S., "twat" is (among other things!) a foolish person.