Dan Riehl links to a piece at CBS’ web site, with video of Barry O chatting with Harry Smith. The Preshizzle, it seems, would like for us all to “tone down the rhetoric”, particularly blogs.

This is pretty rich coming from a guy whose demagoguery would make Huey Long blush. The obliging Smith – not about to screw up his chances for future access – lobs an easy one over the plate:

Smith also asked the president if he is aware of the extreme terms some use to describe him, such as "socialist" or "Nazi."

"Well, I think that when you listen to Rush Limbaugh or Glenn Beck, it's pretty apparent, and it's troublesome, but keep in mind that there have been periods in American history where this kind of vitriol comes out."

When it comes to socialism, Mr. Prez, it’s not vitriol, it’s the unvarnished truth. And, by the way, Limbaugh and Beck are really getting to you, aren’t they?

Tone down your own rhetoric (and nanny-state ambitions), Barry. As long as you insist on dismantling our traditions of personal freedom and limited government, it is going to be a war of tooth and claw. Get used to it. 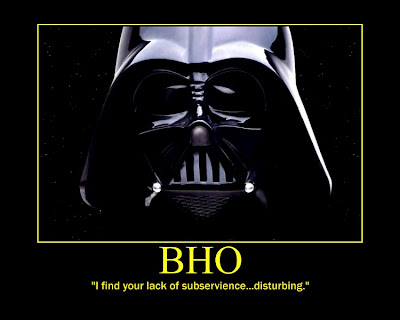 Limbaugh's right. I'm older than him, and I've never, NEVER seen anything like what's going on now. And I am scared to death of Barack Obama (I never thought I'd say that, considering how many idiots were afraid of "Bushitler".)

I popped it out at Hot Air, I think.

Think I should hold my breath waiting for credit?

Mojo: Sorry, old fellow, but I don't follow. Which is your line?

Obama has a very thin skin, indeed. I imagine that he'll get all the more sensitive as his unpopularity continues to increase. This guy is all about validating himself. Narcissists are funny that way.

You have Obama, we have Rudd here in Australia, and they could almost be "brothers" the way they run their countries.
Always thought Whitlam could never be overtaken as the worst but Rudd has done just that, and I feel very sorry for the way the country is heading.

Merilyn: When's the next election in Australia? No chance of a "confidence" vote? I'm not really up on my parliamentary rules.

Not sure Paco, feel he will try to go as long as possible before he calls an election. Think he would like to have things more in his favour first.
Sense there is a lot of anger over the "boat people", at the moment and he is doing his best to create as many "unicorns" as he can to take people's minds off it.