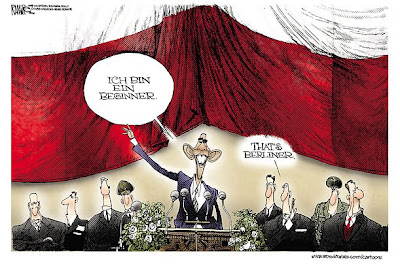 Found at Seraphic Secret, in a post that contains much solid good sense.

Well, I have finally met Karl Rove, [always thought he was a figment of wronwright's imagination].
Don't give me those funny looks, have only been learning a lot about America since reading Tim Blair's blog. Which goes to prove you are never to old to learn new things!
Knew a little bit about America, from the parents two year stay, but that is about it, and of course about John and Jackie Kennedy.

Merilyn: You mean, in person?

Oh, I think you mean the video. Yes, that's our Karl. Looks like a sort of cherub, doesn't he? Don't be fooled!

Me too, Merilyn.
The big surprise was that Rove's appearance was nothing like the mental image I had built up over six years of reading Blair's blog.
Wronwright must take a lot of the blame for misleading me, a proud Minion Emeritus of the VRWC, into thinking our hero would have a sinister and demonic visage.

Yes Paco, watched the video, he has a really nice face, sure he is a sweetheart in reality......