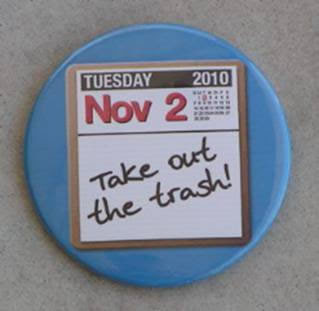 Also, David Freddoso has a brief compilation of election dos and don'ts.

Really, what is it about public office that seems to lure so many people of inferior stamp? Certainly, there are the obvious enticements: power, prestige, fat salaries conjoined with ample opportunities for graft, and the ability, to some extent, to conceal personal responsibility in collective torts against the citizenry. But I have a feeling that there is more at work here. There are times when it seems that, by common agreement, we have permitted public office to serve as a kind of half-way house for simpletons, thieves, sociopaths, unemployed professors, shiftless dreamers, unsuccessful lawyers and the mentally ill; and yet, instead of teaching them some useful skill, like macramé or shoe-repair, and locking them up at night under the watchful eyes of burly, well-armed guards, we actually leave them free on their own recognizance and let them play with the economy and foreign affairs.

A baffling arrangement. Feel free to discuss among yourselves.
Posted by Paco at 7:05 PM

Speaking of the Andrews Sisters.

Awarded the THE SPOT-ON QUOTE OF THE DAY at:
The Camp Of The Saints