More indications that we’ve taken the turnoff onto the road to serfdom.

First, Obama’s National Labor Relations Board has ordered a private company, Boeing, to build its planned new factory in unionized Washington rather than in right-to-work South Carolina. Is Obama’s goal the sort of trade union hell that characterized pre-Thatcher Britain? (And, yes, that’s a rhetorical question).

Secondly, Obama thinks that the typical rich guy is Scrooge McDuck, a cartoon capitalist who enjoys nothing so much as withdrawing to his private vault to wallow in his idle cash. Well, pardon me, Mr. Billion Dollar Candidate, but your hypocrisy’s showing. This is economic illiteracy on stilts, and I don’t want to ever hear again how “smart” and “intellectual” and “cerebral” this spindly, jug-headed dumbass is.

Finally, Obama’s now copping an O.J. Simpson attitude on gas prices. Just as O.J. claimed, after his trial, that he was going to dedicate the rest of his life to finding his wife’s real killer (a simple hand mirror would have sufficed), Obama, who has killed new offshore drilling (except in Brazil, of course), has instructed the Department of Justice to get to the bottom of these gasoline price hikes. Another chance to deflect attention from his own culpability, and demagogue the oil company executives.

And this guy’s approval level is still hovering in the mid-40s? Dang! Is Pogo right? 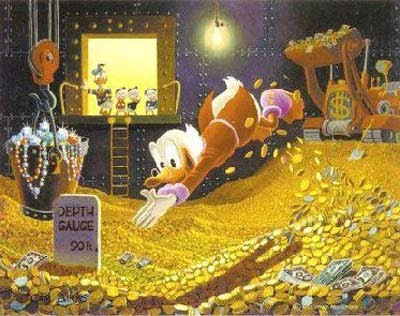 The problem here would be basic human unwillingness/inability to look at reality buttressed by decades of mostly unchallenged Leftist finger-pointing.
Essentially none of our elected politicians or mid- to higher-level bureaucrats have ever owned or managed a small business where they might learn the difference between reality and wishful thinking.

However, part of that "personal popularity" of Obama [as compared to the popularity of his policies] might be "Bradley Effect". I'm betting it is.

Well, personally speaking, I dive into my pool of gold coins every night, don't you?

Oh, wait a minute, I'm only middle class. Which, of course, means I and my cohort will be paying for everything as usual, despite the absence of a pool of gold coins.

If this delusional Marxist gets reelected, I'm moving into my daughter's basement, storing food and water, and contributing ammo for my son-in-law's collection of weapons.

If this sonofawhore gets reelected, the warfare on U.S. citizens will be right out in the open.

They rant against capitalist 'exploitation', ie full utilisation of resources, then they imagine capitalists leave 'surplus' lying around like hording medieval princes. Which is it? Capitalist, or medieval hording 'greed'?

Who would be so stupid as to leave money sitting idle, when it can be invested to make more money - ie the essence of capitalism: utilising and circulating (umm) *Capital*!

The mind boggles at the stupidity of these 'educated' ignoscenti (love that word).

Welcome to socialism, America! And you thought "change" was some innocent thing in ypur pocket. Now, perhaps, you realize that change is all you have lef tafter the socialists take away all your money and create a greater government to control your breathing.

OK, astonishingly, to the MSM, Knee-dipper leader Jack Layton has become a star in the province of Quebec. Hey, he grew up there and speaks French like wot they do.

This is dramtaicaly changing the national framework. The Conservatives, if they were smart, would be producing TV ads that quietly praised Jack!!


But, more than that, it appears that the Liberal vote (Iggy the Russian aristocrat) is in free-fall.

Ordinarily, when the Conservatives are on target to win a majority, the left conjoin ... the NDP desert their party to support the Liberals. It appears to be hsppening the other way around this time.

The Liberals "could" be on course to a wipe=out. There have been 4 federal elections in the last 7 years, and people are pissed-off about this, and the purile politicis and finger-pointing that has gone on during this period. The way to end this is a majoritygovernment ... and it maty happen this time, thaks Jack.

It was an important one, last Friday.