Earlier this afternoon, we experienced an earthquake here in D.C. No, not like the electoral one back in November; a genuine, building-moving-back-and-forth-type earthquake. Pretty paltry stuff compared to what they get in California (5.9 on the Richter scale) - still, the damage was fairly extensive. Just look at what the quake did to my office... 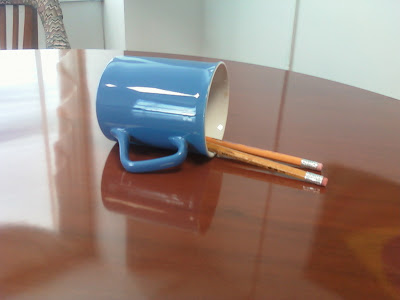 Yes, I know it's hard to believe, but I did survive that.

They’re doing some construction work in our building, and at first I thought maybe a big piece of equipment had gotten loose from somebody and was rolling down the hall upstairs. But the noise kept getting louder, and the shaking more pronounced – and then the alarms started going off and we were told to evacuate the building. My phone rang as I was grabbing my valuables (cigarettes) and heading out the door, and it was Mrs. Paco, telling me that she felt the earthquake in Fairfax, Virginia (the epicenter was near a town called Mineral, not too far from Richmond). The missus was good and rattled (when she was a little girl, she went through the huge 1960 earthquake in Chile, so she’s definitely allergic to these things).

We had to hang around outside for a couple of hours before we were permitted to go back in. The metro was a nightmare, because teams had to check the tracks for damage, but I finally made it home.

And now they're talking about a hurricane this weekend. I've got two dollars in the office pool on frogs and locusts for next Tuesday.
Posted by Paco at 9:47 PM

Indeed! And I feel a case of whiplash coming on, too.

You realize, of course, that this is but the second plague to come upon Washington D.C. in the past few years. Aside from the return of Congress for a new session, I mean.

I refer to, of course, Obama and his flying monkeys. Given my druthers, I'd prefer an earthquake over Obama.

You need a better Pencil Alignment, Control and Orientation system...

But dear god, the horror. Some people just don't deserve such disaster in their lives...

I guess it doesn't help matters any that the red state people clinging to their guns and bibles are fervently praying to God and promising them all sorts of things if Gawd will just wipe Washington D.C. off the map.

Maybe you should go on vacation. I'm sure that Prophylactic Armageddon Cybernetic Organisms will pay for the hotel and rental car.

Pffft, that's nothing. We had a quake a few years ago that knocked over two pictures, and left a three inch crack in the drywall above my back door.

Dealing with the insurance company was a nightmare!

I hope Ma Paco is all battened down and prepared for the storm since North Carolina seems to be ground central right now although it seems to be tracking easterly.

Didn't you get a bet down on the river turning red? Well, let the frogs and locusts come. Pharoah disregarded the pleas to "Let my people go." About that first born son...poor Bo. How will you explain the blood over the door to your office, Paco?

You're not a first-born male, by any chance?

As a firstborn female, I protest the sexism that is inherent in the system.

Swampie, I protest the ageism - MStB (my sister the [insert B-word here]) is the younger of 2 girls and youngest of 3 kids total. We lived without her for 7 years before, we can certainly do so again.

I can commiserate with Lady Paco, as a lifelong Californian, earthquakes to me are no fun.

When the ground beneath your feet, and the roof over your head, turns to liquid, you get a quick lesson in mortality.