Jingle Bells as you’ve never heard it before, featuring Santa and his trusty Colt 1911.

“Captain, I fail to see the logic in a republican form of government”. Obama denies that he’s “Spock-like”.

Clean that up! A store clerk – bearing the marvelous name of Derek Mothershead – knocked out a robber, then made him clean up his own blood when he came to.

Bill Maher, still bitter over the fact that nature has endowed him with a face that looks like a scrotum, keeps plumbing the depths of his own vileness, searching – futilely, I suspect - for the bottom.

Living in Northern Virginia, surrounded by Democrats. Working in Washington during one of the most incompetent, left-wing administrations in history. I tell you, sometimes I feel just like this guy… 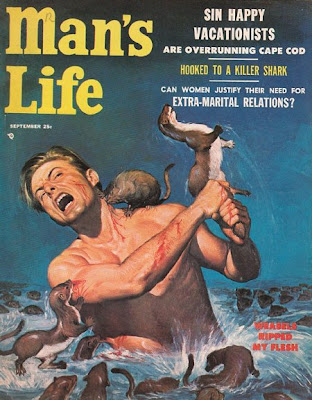 So that's where Zappa got the title.

Deborah Leigh said... Obama is an alien alright, but not Vulcan. But even half-Vulcans can't get their nose that far into the air. But keep practicing.

The store clerk needs to get an award...and a job offer from the local sheriff or police chief.

Bill Maher, the poster boy for vileness, is an overachiever. Could he be waiting for some kind of award?

The Volt is a flaw.

Paco How long til you can rectify the work and corresponding address situation?