Greetings from the "basket of deplorables"!

Hillary Clinton has zeroed in on the demographics of Trump's support.

Now, let's see...Am I racist, sexist, homophobic, xenophobic or Islamaphobic? Or maybe all of these? 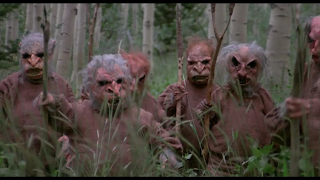 Trump supporters make their way to the polls.
Posted by Paco at 10:19 AM

From one deplorable to another, we ought to give ol' Hil a break. After all, she's had a head injury and doesn't remember committing all those crimes. ;-)

Geez, does that mean I have to upgrade my VWRC membership or is it included?

No. No, she hasn't. I could almost guarantee the thought has never crossed her mind.

And if you helpfully pointed it out to her, she would cackle merrily, and call you crazy.

Veeshir: I think it's included, but there's an extra charge for instructions on the secret handshake.

There's always an extra charge. Sonomagun.
Rove is getting a nasty email out of this from me!

It occurred to me to just check Hillary's parents' health, because current diagnosis asks about that. Online accounts seem unusually brief, her mother died of a "heart" condition, you can see one pic of her online, looking unwell or unhappy?, but she was "very private". Hillary's father allegedly died of a single stroke. They don't even say a "massive stroke" which are the rare kind which actually kill. Also pics of him in a wheelchair, suggesting some contributing condition. My wife is on cholestrol meds because her parents died of that. Either of her parents having some severe inheritable illness, true cause of death, can not be ruled out based on the above. Sad and scary, the level of obfuscation.

D*mn you google! Now I see with different search terms there are plenty of pics of Hill's parents looking more normal. And her father was quite old. Still the lack of information detail is unsatisfactory.

I see T-shirts a la Spartacus. "I am deplorable!"