Trump's going to India, and Gateway Pundit has a link to a great video someone (Solmemes) has put together about how it might go (scroll down for the original video, "USA and India United!").

Update: The Tweet war between Trump and Bloomberg is becoming hilarious: 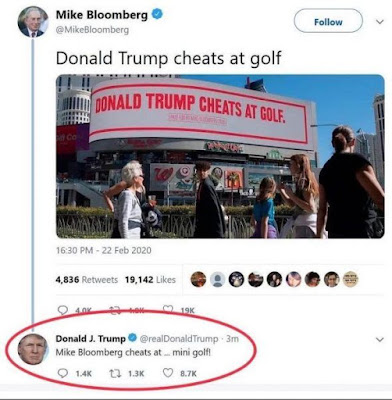 
Update II Yes, we live in bizarre times, indeed. Have you seen the Epstein Didn't Kill himself float that made it into this year's Mardi Gras parade?

Twitter is not a place where presidents and presidential candidates should be sniping at each other.

I have to say that PDT won this one.

While that may be true, if it were not for Twitter, Trump may not have gotten a word in edgewise in 2016. As it turned out, his tweeting kept the Democrat media talking about him obsessively. It may not seem "presidential" but it was damned effective?

I know that's the case, Spiny.

I bet we don't see that Epstein float on CNN.

India's PM Modi brought Trump first to Gujarat where he'd get the best welcome. Even so it's impressive, check out the crowd at Motera Stadium:
https://twitter.com/PoonamRathore25/status/1231849311455064064/photo/1

Visiting Gandhi's ashram and spinning his cotton wheel was a nice contrast away from the crowds.

Modi's govt is no more 'right wing' than Trump's, ignore all the hand-wringing about this and that old problem which Modi is doing his best to solve as fairly and safely as possible for all concerned. (For example Modi's govt has proposed to offer Indian citizenship to Indian Christians persecuted in Pakistan along with other minorities there.)

Finally found a closeup of those white baseball caps everyone in the stadium is wearing:
https://twitter.com/drashokpatel/status/1231918717321306112/photo/1

(The Indian writing before 'Trump' just says 'namaste' by the way, na-ma-s-te. I can read it -
I am a man of diverse useless talents).