And now, a word from our sponsor 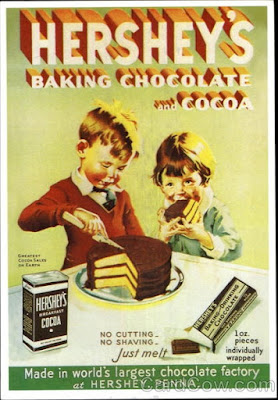 There's a Hershey Pennsylvania? To house the workers I guess.
I did not know that.

We passed through there years ago on one of our many perambulations. Didn't stop for chocolate, though, more's the pity.

It hasa park like a chocolate themed Disney World with rides and whatnot.
I went in 1977 so it might have changed.
The whole area smelled like chocolate. I loved it. YMMV.

Yeah, and next to the chocolate factory is an amusement park. I rode the carousel as a kid. So you'd your the factory, and then enjoy the park. Put it on your bucket list, Bruce.

During my time in the Army, a friend/roommate at one of my posts was from Hershey. Her Mom would send care packages with the largest bars I had ever seen!

How can one pass by the most famous chocolate factory in the world!?!

But I grew up downwind of the Nestle factory in Sydney, where my brother did his apprenticeship and eventually ran the machines for most of his career. Which makes us the competition I think.

Chocolate is good for long hikes, isn't it.