Liz Cheney's starting to remind me of Hitler in the bunker

LOL. The Committee didn't bother to interview the Secret Service guys who were actually in the car when Trump allegedly went berserk before trotting out a witness who provided nothing but hearsay? Forget about their disloyalty and their RINOism, people like Cheney and Kinzinger are just too stupid to hold elective office (and, yes, I know, they are hardly unique in that way). 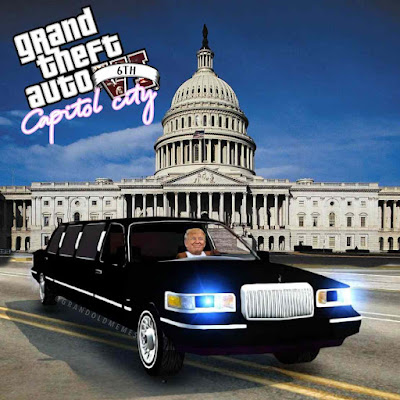 The entire J6 Committee could be cast into a remake of the bunker scene in “Hitler’s Downfall”. What an epic face plant … … in public.

The damage control by the media is quite amusing, but it seems that the coverage is waning. Heh!

Um, he's sick. My best friend's sister's boyfriend's brother's girlfriend heard from this guy who knows this kid who's going with the girl who saw Ferris pass out at 31 Flavors last night. I guess it's pretty serious.

I see the media is now trying to gin up a story that Trump was in a regular SUV instead of the Beast. Doesn't matter to me if he was riding in the Beast, a Toyota Rav-4 or a freakin' 1957 Ford Nomad; Secret Service personnel have signaled their readiness to testify under oath that Miss Assistant Deputy Assistant's "testimony" is total crap. This committee never should have been allowed to exist, and certainly shouldn't have any power to hold anybody in contempt, nor should it have subpoena power. This kind of thing is the real threat to our republic.

Slow learners. How many times have they trotted out some "key witness" or "high level insider" or "former friend" or some such, only to see their narrative fall apart because they didn't do any investigating of the "witness" before they put them on the stand?

Bombshell revelation! The beginning of the end! The walls are closing in! The wheels are coming off!

These people have been lying to the American people for over six years - just on this one topic of Donald Trump. Ask yourself what they've said on other topics that we should believe? That goes for these lying political hacks and their allies in the corporate media. What ought we to believe from them, or it is smarter to assume that everything they say we cannot personally validate is false?

Question: had anyone heard of Ms Cassidy before this week?

Gregory: A complete unknown, at least as far as the public was concerned.

They keep calling Hutchinson a “witness” who “gave testimony”. She didn’t witness anything. She heard some gossip about Trump and passed it on … the way they do about everything Trump.

Hutchinson should be charged with perjury, and lying to Congress...at the very least.

Thanks, Paco. I'm thinking that she might be a Trump troll, sent in to get the left ecstatic over another We've Got Him! moment, and then another collapse into tears when the lies are exposed.