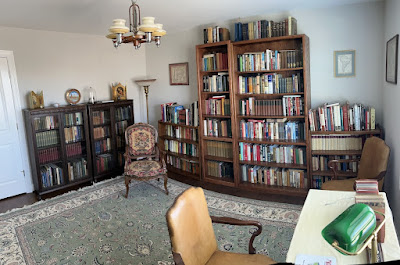 Mrs. Paco and I were looking around a thrift store yesterday, and I found an interesting book: Brewster's Curious Titles, compiled by Ian Crofton (Cassell, 2002). The fat volume includes 1,500 titles of novels, plays, movies, and art works which have titles that are either curious in and of themselves, or which have interesting stories behind them.
This is a fine "browser", as well as an introduction to certain authors and artists with whom I was previously unfamiliar. Here are a few entries which I found to be both enlightening and/or amusing. The wry humor of the editor is encountered here and there throughout the book.

Homage to New York.  A giant (27 ft-high) self-destructing sculpture by the Swiss artist Jean Tinguely (1925-1991) comprising various bits and pieces such as a piano, a pram, a meteorological balloon, plus numerous wheels and motors. These latter failed to operate as intended and after it caught fire it had to be destroyed by firemen with axes rather than by itself...Tinguely ensured the successful consummation of subsequent self-destroying sculptures by employing large amounts of explosives.

And, as we all know, the word "art" has become dizzyingly comprehensive these days, as is exemplified by this next, er, piece.

Everyone I've Ever Slept With. A tent constructed by Britart enfant terrible Tracey Emin (b. 1963), embroidered with the names of everyone she had ever shared a bed with. She followed this up with My Bed, an unmade bed featuring soiled sheets, empty vodka bottles and used condoms, which surprisingly failed to win the 1999 Turner Prize.

So, Tracey Emin...I wonder how many names are actually embroidered on that tent? 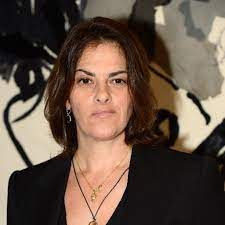 Here is a book I've owned for years, but haven't got around to reading yet.

The History and Adventures of an Atom.  An anonymous satire on leading contemporary politicians published in 1769. It was almost certainly written by the novelist Tobias Smollett(1721-1771). The atom in question has been incarnated several times, most recently in the body of somebody in Japan. Smollett's Japan is clearly England, and the various Japanese characters would have easily been identified by contemporary readers...

I should point out that, while, as the editor says, the characters would have been identifiable to contemporary readers, scholars have been working for decades to identify the true identities of a myriad of characters who represent actual historical persons, but were less prominent than, say, William Pitt the Elder, whom a modern reader with basic knowledge of the period would most likely see right off.

The Electrification of the Soviet Union. An opera by Nigel Osborne (b. 1948) with a libretto by Craig Raine (b. 1944), based on the novel the Last Summer and the poem Spectorsky by Boris Pasternak (1890-1960). The story concerns a young poet's loves and his response to society, and the title comes from Lenin's famous practical definition of communism..."Communism is soviet power plus the electrification of the whole country."

Lots of references to genuinely good literature and art in the book that I might actually like to experience, so it's valuable in that regard, as well as being a guide to some of the more bizarre and amusing corners of culture and the eccentric inhabitants thereof.

Lots and lots of vodka, Paco. Nearly to the point of alcohol poisoning.

As a fellow book lover, I commend your library Mr. Paco sir. I had one that large until we moved to Florida and I had to get rid of them, a fact that I mourn to this day.

Also, that woman looks like she probably killed most of her lovers.