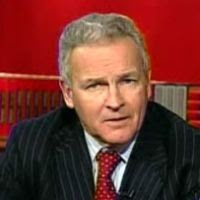 The sophisticated and politically savvy R. Emmett Tyrrell, Jr. updates us on his campaign for mayor of Chicago. Among many interesting developments is the fact that the tenant of Rahm’s Chicago home has also entered the race:

One thing that has not been given proper attention is that Rahm acted on the spur of the moment. On September 7 Mayor Richard M. Daley surprised everyone and declined to run for reelection. That was when Rahm jumped in, thinking he could reclaim the home that he had leased to a patriot, Rob Halpin, in 2009. Proof of how recent Rahm’s decision was to run for mayor is that Mr. Halpin signed a lease extension in September.

A few days later Rahm made his decision and with his usual charm thought he could bully Mr. Halpin out of the house. Now Mr. Halpin himself is running for mayor, and the 59-year-old real-estate developer made clear his hard feelings toward Rahm when he told the Wall Street Journal, “Maybe I’m just as tough as Rahm.”

No doubt you are, Mr. Halpin. You hang in there!

And best of luck to you, Mr. Tyrrell. You have our prayers and this blog’s endorsement. I’m sure the requisite number of actual votes is a mere technicality that can be overcome in the manner of your distant predecessor, Big Bill Thompson.
Posted by Paco at 7:31 PM

"We don' want nobody what nobody sent."

Yeah, I thought that Rahm's sudden departure was more in the nature of a desperate leap overboard just before the torpedoes hit.

I just have to wonder what Rahm had on Daley to get that sudden indifference to reelection.

But as mojo sez, the fix, she is in. All hail Mayor Rahm!

No, Daley left, probably, because of the ill health of his wife [who apparently is quite nice] and the looming budget problems in Chicago. It's gonna get ugly.

As the saying goes, you never hear of rats boarding a sinking ship.

If someone will send me a ballot - actual or copied - I'll vote for Tyrrell...even though I live in Florida.

rahm saw the writing on the wall and just wanted a 'graceful' exit from his overlord. i am sure he doesnt give a damn if he is qualified for mayor of one of the most corrupt cities in america
that is just my humble opinion