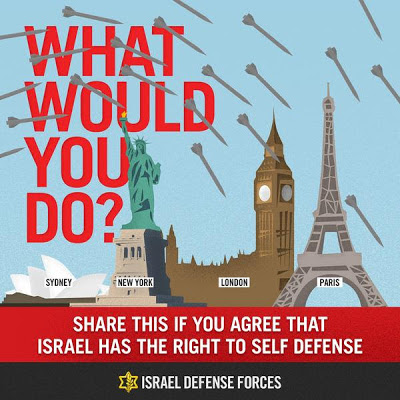 Update: Whoa! I might need to rethink my position after seeing this shocking photo of Israeli aggression.
Posted by Paco at 7:44 AM

Reposted at PPII, thanks, Paco.

Deborah Leigh said...Well, we know what Barry does.

Everyone pray for Israel.

And to add to the already player heavy battlefield, Iraq releases the much sought after Hezbollah leader. Thanks Iraq! Signed the fallen of the US Coalition.

Nice post Paco..Will definitely be praying for Israel. Everyone has the right to self-defense..It's instinct..

Hey, how did Islamic Rage Boy get from Pakistan to Gaza? And he's a cross-dresser! Whoo-hoo, don't let the Hamas guys find out about that, Ragie.

Course, Hamas terrorists have been known to cross-dress too, such as dressing as women in order to sneak thorugh cordons of Israeli soldiers while hiding in a crowd of real women, secure in the knowledge that the Israelis won't deliberately shoot at women. Those black tents make good disguises, and the veils cover up the beards.