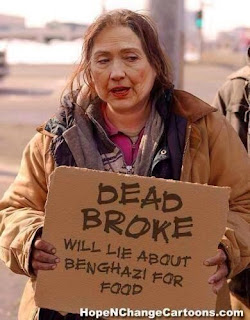 Apparently Hillary is appalled by many of the laws her husband signed in, but then he only did it to get elected, because the Clintons are just poor outsiders, tossed around by fate, doing what they have to do...

Well, at least she dumped that orange polyester pants suit she used to sleep in. Much more fashionably dressed now.

Amazing what a high-priced fashion consultant can do for a pol.

By the end of Hillary's first term Chelsea will be old enough for the job. She can be Mom's VP in the second term and step right into the top job in the next election as the youngest president in history. Isn't hereditary privilege wonderful? La Reine est mort, vive la Reine!

And you think you're fed up with Bush's and Kennedy's? Just wait for the Clinton dynasty.

She must have been communing with Elizabeth "Fauxcahontas" Warren.

Deborah.... So true. Hillary will lie about anything and anyone. It's a congenital defect most prevalent in Democrats.