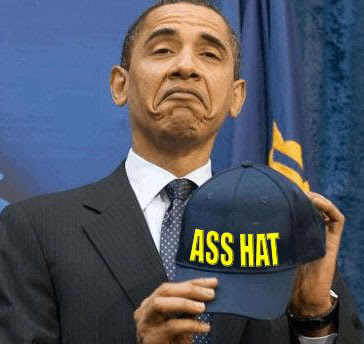 (Gratefully pinched from Moonbattery)
Posted by Paco at 4:45 PM

They say the hat makes the man.

Is that really his expression or is it one of those photoshop thingies?

The expression is real.

The cap is, of course, photoshopped. It was a FBI cap in the original pic. Don't know why he looks like he just kissed the Mooch.

If he squeezed hard, that might be an "Ass-cheek hat", but otherwise it's much too small.

If it was an FBI hat he's mocking it.

A president would either bypass this photo op or his handlers would stage something a little more respectful.

Unless a president would be...well
would be Barack Obama, for instance.

jonah, The Current Occupant proudly mocks everything of value in this country - the FBI would be in good company.

I've seen that look on the faces of some teachers I've known...because they ARE 'better' than us 'little people' after all.

That hat is perfect, but it's too small to fit President Magic Mouth's massive ego.

It is now 2012 in Australia, so Happy New Year Paco and company.

Happy New Year, Merilyn, and everybody! May the coming year be miles better than this last one has been.

Thank you for sharing such a nice article. I love it.Please visit Office Furniture Miami