In 1974, Leonid Brezhnev, head of the communist Soviet Union, had multiple strokes.

After that, he only wanted to dress up in military garb & attend formal events. Pravda journalists praised him despite knowing he was 'out of it.'

The American media are no better with Biden.

Well, they can't dress Biden up in a military uniform; that would be over the top even for his cabal of minders. Let's see...he's always jabbering about commuting to D.C. from Delaware on Amtrack. How about this? 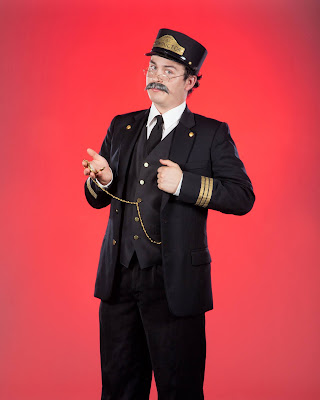 I can see him in the Oval Office now...

I've called the NYeT "Pravda on the Hudson" for years.

Dressing Dopey Joe up as a train conductor would be an insult to train conductors. I suggest dressing him up as a lifeguard and giving him a rubber ducky to play with. That at least might trigger some real memories instead of the made up ones he's famous for.

I don't know. I think some of his "real" memories may be bunk, too.

I expect Slow Joe could transfix us all with stories of him scaling the cliffs at Pont du Hoc with the Rangers at Normandy, or fighting it out with Charlie house to house in Hue during Tet, or the time he planted a thousand pound bomb on the flight deck of Akagi at Midway...

In Pravda's defense, they were forced to do it, the NYTimesWashPostCNNABCCBSNBCetc. do it for love.

Give me five minutes with his teleprompter and he'll tell about the time he loaded 500 lb bombs on Zeroes on the Akagi's flight deck on December 6th, 1941.
Then took a train to Delaware.

I want to hear more about how he led the Jets to victory over Corn Pop and rival gang, the Sharks.

I’ve long referred to the NYT as “The Fish Wrap of Choice “.