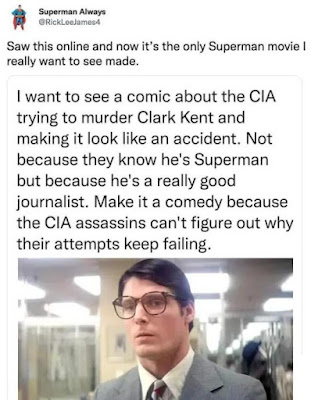 Nice try, but the pros running DC and Marvel have one trick, and one trick only. And that's making characters gay. Superman is now gay, and apparently DC's doing the same with Batman. And then, once the characters are gay they fight climate change and systemic racism.

Saw one clown say DC should have Superman "smash the Klan." Because why the hell not? Maybe he should also defeat Blackbeard because that's the level of imagination these people have. Once the character is gay we get endless panels of them walking on a beach talking about food. Because that's all the emotionally stunted SJWs have of significance in their lives.

There's more inventiveness and comedy in that one idea than has been seen in Hollywood for a decade, at least.

Actually, the FBI would be after Clark Kent because Kryptonians are well known for being not woke, and his un-wokeness carries over into his Clark Kent identity.

And Raquel Welch in Kansas City Bomber could be the hot babe.